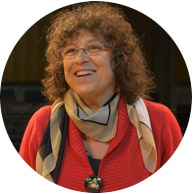 Susana Pendzik (PhD., RDT) is Head of the Drama Therapy Graduate Program at Tel Hai Academic College (Israel), lecturing also at the Theatre Studies Department of the Hebrew University of Jerusalem, the Swiss Dramatherapy Institute, as well as in other institutions of higher education in Europe and Latin America, and conducting workshops worldwide. Susana is founder and honorary member of the Swiss Dramatherapy Association, accredited supervisor by the Israeli Association of Creative and Expressive Therapies, representative of Israel at the European Federation of Dramatherapy and at the World Alliance for Drama Therapy. Published poetess, theatre director, and researcher, Susana is the author of many articles in the field, a book for using action techniques with abused women, co-editor of Assessment in Drama Therapy (2012), and The Self in Performance: Autobiographical, self-revelatory, and autoethnographic forms of therapeutic theatre (2017), and co-author of a recently published book in Spanish, Dramaterapia: Un enfoque creativo para el trabajo terapéutico (2018).