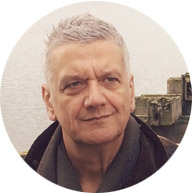 Lambros Yotis
Psychiatrist – Dramatherapist (Ph. D.)
Lambros Yotis, M.D., Ph.D., is a psychiatrist (National Kapodistrian University of Athens, Greece) and a dramatherapist (PGDip, University of Hertfordshire, UK). Since 1990, he has been working in the mental health frame, both in private and in the public sector. As a psychiatrist, he has worked for the psychiatric services of the University of Athens, as well as for the Greek Anti-Stigma Programme under the umbrella of the W.H.O. Besides he studied theatre (Drama School of Athens) and has worked both as an actor and a stage director. He is an accredited Playback Theatre leader and trainer (Center for Playback Theatre, N.Y.) and a founding member of the Association of Dramatic Expression and Therapy “Palmos” in Athens, Greece, in the frame of which, the first professional Playback Theatre company, “Playback Psi”, has been established since 2004 (www.palmos.info).